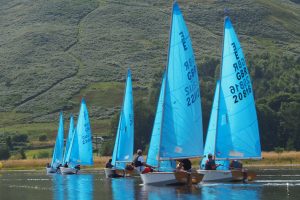 It was great to welcome many old friends back to St Mary’s for the 2021 Scottish Nationals. Some previous regulars were unable to join us but there were also a couple of boats attending for the first time which was good to see.

Saturday was bright, warm and clear with an almost tropical sun – wind was variable but generally lacking if you get my drift.

The race officer was determined to get at least one race in the bank and the fleet enjoyed a leisurely sail in the sunshine to the race area with stragglers assisted  to the starting area by the rescue fleet.

At the warning signal it was not entirely clear which direction was to windward but the assistant race officer helpfully pointed the way. At the starting signal most boats set up on a broad reach. After the ‘windward’ mark Steve Blackburn and Tim Brownwell (WLYC) led the way followed by Jonathan Woodward and Matt Smith with Ges Brown and Julie Moore in third. After a poor start Charles Morrish and Alison Robertson Morrish (StMLSC) eventually managed to get themselves up to fourth.

As the fleet rounded the windward mark the second time the leading boats all experienced varying degrees of misadventure. First Ges and Julie forgot their sausages and headed for the wing mark; Charles and Alison helpfully pointed this out once they had got beyond them. At this stage the breeze was drifting down the course from the leeward mark and Jon and Matt were blanketed by the running boats and parked up. Steve and Tim meanwhile remembered just in time that they were not allowed to pass through the start line on this leg and sailed along the line to clear the pin end. By the time they got there Charles and Alison had crept into the lead which they then held to the finish.

After the race Steve and Tim did the gentlemanly thing and retired following a protest leaving Ges and Julie second and Jon and Matt in third.

The evenings entertainment was Scottish cèilidh dancing and at the end of the evening Charlie and team made bacon and egg butties for the hungry dancers.

Morning soon approached and after a hearty Scottish breakfast we set sail. The weather was not the costa del Scotland we had the previous day. It was overcast and a bit chilly, we had more wind than the day before with crews nearly sitting on the deck, I would say the wind was pushing a force 2. We sailed down the loch or as we said the lochdooooon!

Race 2: the OD was very prompt with the racing and sent us just round the corner. As the starting gun echoed over the Loch. It was clear that the right hand side of the beat payed off. Ges Brown & Julie Moore (SCYC) took the lead from start to the finish. Steve Blackburn and Jonathan Woodward & Matt Smith (South Staffs SC) were taking turns for 2nd place. Steve took 2nd with Jonathan in 3rd.

Race 3: took place soon after everyone had finished so you had to be on your toes to check the shifts and the pressure coming from the bottom of the loch. Steve Blackburn took full advantage of the start and led all the way to finish by creating a gap up the first beat. The following pack which consisted of 4 or 5 boats were bunched up so anyone could have been 2nd. Jonathan took 2nd place with Ges in 3rd. Colin Gardiner & Cathleen Swarzlose (Tynemouth SC) was sailing a classic Ent from the 80’s 20518 Pan-galactic Gargle-blaster, once owned by Ian Southworth and the boat has fabulous pedigree and is still extremely quick today helped with Colin’s helming skills. He finish 4th in all previous races.

Race 4:  Was down to wire for Ges, Jonathan and Steve, all of them could win the event. Steve and Colin started well. Colin went left up the beat. Steve went in the middle and Loz Young & Christine Middlemiss (Derwent Reservoir SC) went Left. Colin went round the windward mark first followed by Loz, Meanwhile Jonathan and Gez had missed timed the start and was at the back of the pack. Steve, Jonathan and Gez all met at the windward mark. They all stayed three a breast until the leeward mark. Steve went right and this move paid off and into 3rd he went. Jonathan and Ges didn’t improve their positions with going left up the beat. Steve eventually over took Loz as we sailed an extra lap. On the following downwind leg Colin hit less pressure on the broad reach to the wing mark. This let Steve and loz closed right up to Colin. Steve took the win and the championship on the line with Colin in 2nd half a boat length behind. Loz took third with Charles Morrish (StMLSC) in 4th.

A great championship and a huge thank you to all members at St Mary’s Loch Sailing Club who made the event possible and we look forward to next years event.