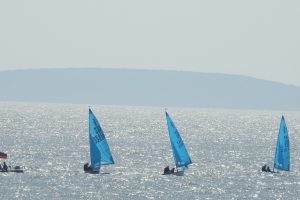 The forecast was for heavy winds from the Northeast. Penarth YC faces east and the fetch from Bristol is long enough to produce off-putting waves on the shore.
Several crews had already made their minds that it was not for them.

The cruiser fleet out of Cardiff Bay were starting at midday. The schedule was to get them away before the Enterprise start.
It was noted by the experienced that none of them were reefed down a good sign that conditions were dinghy friendly once the break had been negotiated.

Richard and Steve used their superior weight to power up the beat only to be overtaken by Ian and Natalie and Peter and Helen down the reaches. A messy leeward mark rounding had Pete and Helen briefly in the lead. Richard and Steve again used their weight to full advantage getting enough lead to hold off Chris and Alex who came through for a second.
The wind had dropped a bit for the second race and Ian who described it as perfect conditions for them, led off the start with Peter and Helen second.

By the finish Ian and Natalie were well ahead with Richard and Steve bringing up the rear.
This open had the best and worse of Penarth. The third race started in light winds that got lighter as it progressed. The tide was now in full ebb so the beat was slow. Ian and Natalie again led for most off the race. Richard and Steve had been finding some success by going left and lee bowing the tide, a subtle change in the wind direction ruined this and by the last reach of a shortened course they were almost a leg behind. The tide washed them down to the leeward mark to find they were much closer to both Ian and Chris. Pete had hit the right corner found wind of his own. Finishing several minutes ahead. My the finish second place was up for grabs and it was taken by Chris and Alex . Ian had to tack off and to his annoyance hit the finishing mark allowing Richard and Steve to sneak through.

It was still wavey, several members had waited around in their gear to help recover the boats.
Many thanks