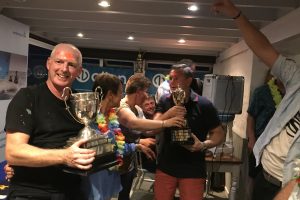 The last nail biting race of the Allen, North Sails and Selden Enterprise Nationals at Mounts Bay took place on Thursday due to a forecast of 40 mph winds on Friday.  After four days of brisk South Westerlies the wind had dropped to a modest 6-10 knots and swung to the South East – an unusual wind direction according to the locals.  After nine excellent races all the major trophies were still up for grabs and much would depend on the outcome of this final tenth race.

It was between defending champions Dave & Chris Jackman and Paul Hobson / Craig Wheatley. Paul had been runner up many times, and having won the event previously as a crew, he was keen to be the first to also win the event as a helm.  Paul and Craig had a one point lead over the Jackmans with both pairs having the same number of race wins, but overall the Jackmans had a worse discard, meaning that Dave & Chris had to beat Paul & Craig and finish in the top three to retain their title.  No easy task.

There was also only one point between the two leading lady helms Ann Jackson and Jane Scutt for the Iris Holt Bowl so it was all to play for!  In the much-coveted Mary Arnold Baker Trophy (First Lady) the main contenders Becca Stephens and Laura Bevan were close in 6th and 7th places.  It was also a close run thing in the Rolling Pin Trophy (Husband and Wife/Partner) with just one point between Nigel & Andy Bird and Darren Roach with Hayley Ramadhar.

As the race started, former Champion Nick Craig with son Adam (10) showed his class by leading at the first mark.  He retained his lead throughout the race and won by a country mile!  Phil Ford & Jane Humpage bagged an impressive second after a difficult week and Jeremy & Becca Stephens (another former Champion) were third to regain the Mary Arnold Baker Trophy.

Meanwhile, Paul and Craig had engaged Dave and Chris in the inevitable pre start match race and, despite being caught up in a gaggle of several other Looe boats, managed to slow them down sufficiently to miss the start by 2-3 lengths.   Although Dave and Chris did manage to wriggle free they could not find enough boat speed in the fickle force 2-3 breeze to get up to the third place they needed so Paul and Craig were crowned worthy Champions.  First time for Paul (at the back end of the boat) and for Craig after many years of trying!   On checking the record, Paul is the only person so far to have won Championship week as both a helm and a crew.  Craig also won the Betty Southworth Trophy for 1st crew over 40 and Paul won the Admiral’s Trophy for 1st helm over 50.

Yet another former Champion Tim Sadler with Chris Keatley managed to fend off a spirited challenge for third place overall from Martin Honnor and Gabe Hill.

The ladies Trophy was going to the wire with Jane leading Ann by several places but Jane succumbed to a 720 at the last leeward mark to drop crucial places and with that the chance of victory.

Back on shore, the excellent volunteer Championship coordination team were busy setting up for the prize giving and disco which would take place that evening in the club house, after the Enterprise Class Association meeting led by Commodore Richard Pryke.  With everyone in positive mood, the class has great plans to increase turnout at next year’s Nationals Championship taking place at Looe Sailing Club.

The prize giving started with spot prizes thanks to event sponsors Allen, North Sails and Selden ensuring that everyone walked away with some goodies.  At the main event, the array of impressive silverware was handed out to riotous applause, a mark of the goodwill and friendly nature of the fleet.  And then it was party time!  In true Enterprise fashion the competitors, family and friends kept the bar staff busy and the clubhouse rocked until the early hours.

Altogether an excellent week at Mounts Bay, greatly enhanced for the first part of the week by having the Ospreys racing alongside us for their four day National Championship. They proved to be very entertaining by inviting us to share their mad “Sheppey Raffle” which raised a couple of hundred pounds for the RNLI.

We’re all already looking forward to our next events which include: