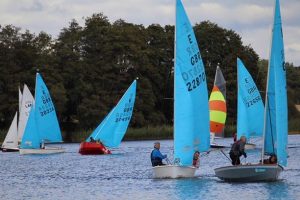 The Enterprise Thames Valley Championship Open meeting on 10th October saw a fleet of 9 consisting of 3 visitors and 6 home boats sharing the water with the GP14 Open.

After the mist lifted, which caused a delay in proceedings, the wind quickly picked up although the steady figures in the Met Office records of 6-8 knots NNW-N belie the shifting and variable nature that added spice to the tactical sailing and allowed the running order to change frequently.

The race officer, Bruce Hill, stuck to schedule with one race before lunch followed by 2 races back-to-back in the afternoon.

In the first race things were looking good for Frensham as Nick Carr and Kaz Kawamura had a flying start from the pin end of the line and pulled out a lead, which they reinforced after being closely challenged by Katrina Gilbert and Karen Ferguson.  Ann Jackson and Alan Skeens however gradually reeled in Nick Carr to reduce his lead towards the end of lap 1 leaving Katrina Gilbert trailing and a large gap before the rest of the fleet led by Ed Mayley and James Budden in the Minima club boat.

Shortly into lap 2 Ann Jackson took the lead and Katrina Gilbert gained speed to regain second place holding this order to the end of the race.

Race 2, following a revised course and warm sunshine, saw Ann Jackson starting well to gain a good early lead but Katrina Gilbert gradually closed this down and took the better course to take the lead early in the second lap.  Meanwhile Robin and Paul Broomfield held onto 3rd place.

Towards the end of the second lap Ann Jackson regained the lead leaving Katrina Gilbert in second and on the last lap Nick Carr overhauled Robin Broomfield to push him down to 4th.

In Race 3 Katrina Gilbert won the best start at the committee boat end but a shift allowed Nick Carr from further down the line to take the lead and by the first mark Alan and Barbara Dance had also overtaken Katrina Gilbert.  On the next good beat however Katrina Gilbert overtook both but was very quickly overtaken by Ann Jackson.  The lead then switched again three times finally leaving Katrina Gilbert with a good lead.  Having secured two first places and apparently owing to some comfort issues of the crew in the increasing heat, Ann Jackson retired and right at the end Alan Dance pipped Nick Carr to take the now available second place.

After the racing many were happy to chat and enjoy the lack of Covid restrictions in the warm sunshine with a convivial tea, this year provided by the galley, and prize giving by the Rear Commodore, Kate Wyatt.