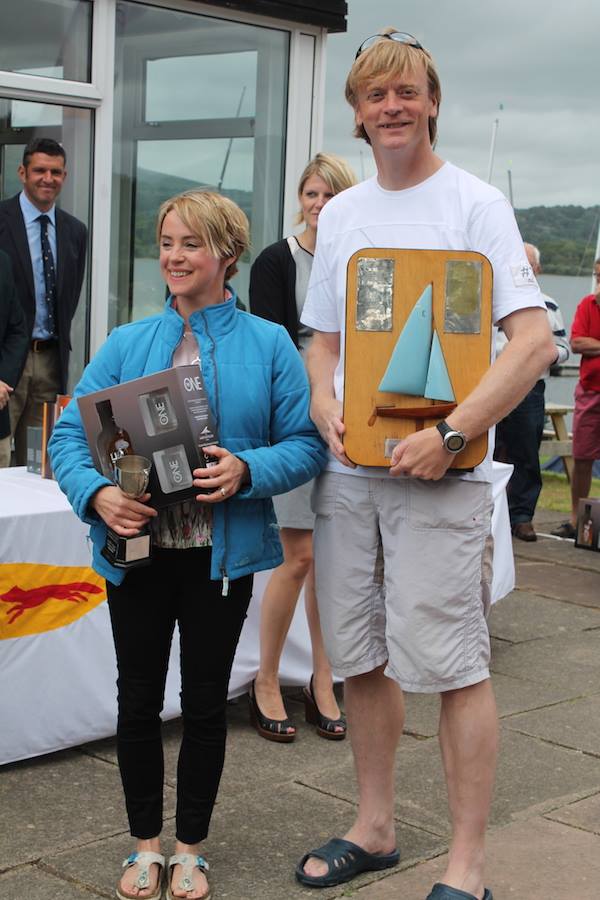 9 Enterprises took part from all around the Northwest to the Midlands. The furthest competitor was from Midland, Chase, Others from Tynemouth to Chester.

Race 1 took place in light wind force 1 – 3 at times the helm and crew were able to sit out on the beat and then scrunch up in the boat as the fluky south west bent round the mountain.

At the start there were three boats with a chance to win the first race. Alan Baker and Thea Armstrong (Tynemouth) started at the pin end and held the beat all the way on the Right. Royston Taggart & Steve Blackburn (Pilkington) and Mark Ninnim & Emma Smith (Bass) started near the committee boat end, they both held the beat on the left hand side. Mark & Roy came out smell of roses and Alan unfortunately found one of those unexpecting holes, which seem to pop up at times at Bass. Royston had good boat speed on the run to create room at the mark, which all Enterbox sailors call water. Mark went into second place. The next and final beat to the very tricky mark 7 was interesting to watch. Mark went right the opposite of the previous beat. Roy went in the middle and Alan on the Left. Again Mark racked up at the windward mark in first, as if he had artificial intelligence implanted into his skull, executing each beat with fine precision. Mark went onto to win the race with Roy in 2nd and Paul Young and Megan Ward (Midland) in 3rd.

Race 2, The wind had picked up to marginal planning conditions and the course had been changed, so we were sailing in the usual racing area. At the start Royston created the best start which favoured sailing on starboard and tacking onto port layline to the first Buoy. The beat wasn’t always going to be that simple with Bass’s famous shifts. This time Royston created a gap from second place and went onto win the race. Mark was 2nd and Paul Young showing great pace with another 3rd ahead of Alan & Thea.

Race 3, the start was a lot closer with Mark and Roy equally going well up the first beat. Roy just nipped round the windward buoy first, with 2 big laps around Bass anything could happen. Mark was in contention of winning the race all the way round with Roy only a few boat lengths a head. It all went down to the last beat. Roy was covering Mark with every tack. Bass can always spring up strange wind; Roy found a lane of fresh febreeze and lifting to the finish. Mark was unable to find the same breeze so opted to sail right to lay line but Roy had done enough to win the final race of the day. Again Paul was sailing well and finished in 3rd. Simon & Charlotte Jaram (Beaver) were also showing great pace finishing 4th with Alan in 5th.

We all retired to confines off the bar for the Evening disco and a few well-earned beverages for us to all enjoy.

Race 4, Big Sunday! Not only did Mark and Roy have to beat each other to win the Northwest Area Champs it was blowing a ‘Hooley!’ It wasn’t only whipping dogs of chains it was whipping horses, cows and African elephants as well. With gust in excess of 35mph it was going to be exciting to say the least. I always love the way OD’s have the startline in the windiest part of lake. The OD created a fantastic course with good beats runs and the all important how fast can you go broad reach with the daring gybe buoy in all the wind, with nowhere to hide from the torrent of gusts lifting the spray. Mark started well with Roy slightly behind, Roy decided to crash tack with his crew being struck by the boom and an impressive bump to match. As the competitors arrived at the shifty windward mark, it was Ninnin rounding 1st with Taggart in 2nd not far behind. As the race continued Mark with his local knowledge decided to take the longcut and go to the wrong buoy. Well not the necessarily the wrong buoy but in the wrong order. Royston decided to follow Mark on his magical mystery tour. In third was Paul zipping and bouncing his Enterplank on a lovely broad reach showing the top two that he had all the right navigation skills to sail at Bass by sailing the correct course. Paul briefly went into 2nd but was soon passed by Roy on the following leg. As the race continued it was Roy who was going to faultier with a dodgey bracket on his Rudder he couldn’t stop the Rudder blade from popping up and subsequently retired with his boat turning into Red October. Mark sailed his Starship to victory winning the North West Area Championship 2016. In 2nd was Paul Young laying his hat on the finish and the final finisher of the race.

A big thank you to Bassenthwaite SC for organising the Regatta. What a great job you have done!