The 60th anniversary Allen Brothers Enterprise National Championship held at at Brixham Yacht Club was won by Tim Sadler and Richard Sault from Yorkshire Dales SC with a convincing 26 point lead over their rivals, Phil Ford and Jane Humpage from Bristol Corinthian YC.

The weeks racing concluded with two excellent races, despite the shifty winds giving the Race Officer Sean Semmens some challenges getting the fleet started. With the wind picking up to a blustery 10-12 knots, the close racing throughout the week meant that every boat in the 47 strong fleet was working hard to maintain positions over their closest competitors.

Off the water the pressure was also on the fleet to keep up with the social scene, as the class celebrated its 60th anniversary with outrageous 1950 themed fancy dress, a silent auction for a mast kindly donated by Selden and a more riotous auction of a British Olympic Sailing Team poster donated by North Sails. Combined with fines for on the water misdemeanours, over £500 is being donated to the Enterprise class’ adopted charity Sail 4 Cancer. Additional and much appreciated day sponsors included Pinnell and Bax, and Hyde Sails. With the fleet split into three divisions – Gold, Silver and Bronze – the daily prize giving, improvers awards, and the infamous Gez Brown ‘Ginga awards’ ensured inclusion across the fleet including first time attendees Robin Broomfield and Paul Bloomfield from Minima YC in their first Enterprise Championship winning the Ginga Plate for the lowest placed qualified boat with all races sailed.

The overall finishers in the top 10 were particularly close after nine races with just one discard. Jeremy Stephens, crewed by daughter Rebecca from Penzance YC were third overall, just beating another father and daughter combo, Phil and Laura Bevan from Grafham Water SC into fourth place. Newcomers to the fleet, Darren Roach crewed by his sister Natalie Roach from Royal Navy SC had a disappointing last day dropping from second place to fifth overall. Popping up in 6th and 7th places, and fighting for leadership of the Silver Division were more father and daughter teams with Richard and Millie Pryke from Ripon SC just taking the lead against Nick and Rachel Jackson from Burghfield SC.

Proving that you don’t have to be related to sail well together, Alice Allen and her crew Andy Massey (Sharky) from Bristol Corinthian YC came 12th overall to win the Ladies National Helm trophy against close competition from Ali Morrish and Nick Scutt from St Mary’s Loch and Middle Nene SC.

The winner of the Bronze Division was Ali’s father Charles Morrish crewed by Emma Coleman from St Mary’s Loch and Midland SC, with Thomas Kliskey and Sophie Barrett from Penzance YC in second place.

Alice Allen and her crew Andy Massey (Sharky) from Bristol Corinthian YC came 12th overall to win the Ladies National Helm trophy
The Mary Arnold Baker Trophy 1st Lady | Jane Humpage
The race organisers from Brixham YC commented on how the Enterprise races were incredibly closely fought, despite the frequent and random wind shifts. With often just seconds separating the boats after 3 lap races, this shows the close competitive nature of this one design fleet. This also reflects in the variety of boats in the top ten, with Peak Dinghy Spares GRP hull in first place, the Rondar Mark 3 hull in second place and a Prior-built all wooden hull in third place, proving neither age or price of hull makes that much difference – it all comes down to the sailing skill of the helm and crew – which was very much demonstrated as the shifty conditions made each race a real ‘snakes and ladders’ game on the water.

The final night prize giving was a black tie dinner, with fantastic hand made Enterprise decorations provided by Mark and Liz Matthews from Castle Cove SC. Lizette Van Nierk from Sail 4 Cancer presented the prizes, with the fleet having raised in excess of £500 for the charity. Thanks go to event co-ordinator Carol Ford, assisted by Jeremy Squires and all the members of the Enterprise Association committees who make these events possible. 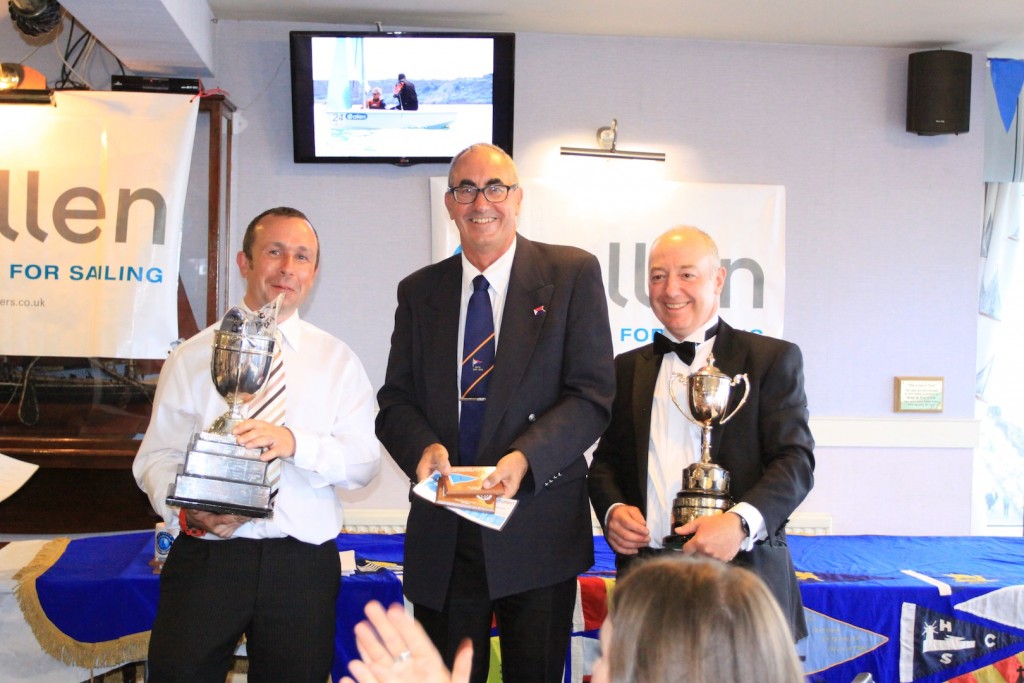 Report Written By Alice Driscoll | All Photos By Gareth Fudge