Ents go down to the wire in Looe 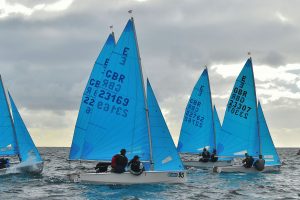 The Looe SC 2020 mini-series has been full of thrills, spills topped off by a final race nail biter.

Sarge & Elmo needed a top 3 finish with Darren & Natalie behind him to take the tittle, while Matt & Ivan could also overhaul Sarge if they won with Sarge spat out the back of the fleet.

With 2 races lost due to bad weather conditions it was touch and go that race 6 would go ahead while the country battened down under storm Aiden. Thankfully, the race team left the decision to the last minute and a weather window opened in the eye of the storm.

With a nasty ground swell left over from the first wave of the storm the race team got us away quickly, The Jaycocks played the left of the beat nicely to lead at the windward Mark, follow by Darren, Callum, Sarge & the Bowdlers.

While the Jaycocks enjoyed some decent space on the following reaches the rest of the fleet compressed and pressure on positions built.

On Beat 2 Darren &; Natalie kept on eye on Sarge & Elmo playing the right of the beat for a while also using the shifts well to overhaul the Jaycocks to lead out of round 2.

Just when it looked like it was a done deal Darren & Natalie clipped the mark at the end of the 3rd beat creating an opportunity for the Jaycocks, the brothers needed no invitation & took the lead for round 3.

With Callum & Connor putting pressure on Darren & Natalie. Sarge & Elmo had a glimmer of hope but were fighting their own battle with Brian & Esther. Meanwhile Simon & Jacko’s attempts to catch up saw them test the water temperature a couple of times.

A great series had a fitting finale, Thanks to the Safety & Shore team for a COVID tight event, showing racing can happen if everyone respects the circumstances.

We can’t say when the Pies giving might be but I am sure it will be great when it happens, well it is Looe after all!