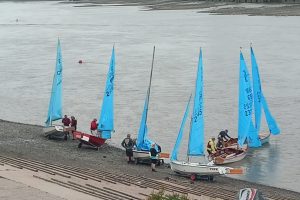 A unique race in the Enterprise 2022 calendar. Perhaps the spiritual home of the boat’s designer, Jack Holt, who was born in Hammersmith.

A single class one-design pursuit race? How does that even work?

Borrowing heavily from the format of SBSC’s Ruby Bell race, we planned to make the most of our tidal location and use the tide as the variable allowing competitors to decide on their own start time. A unique twist. We would then record each boat’s start and finish time and calculate a winner with the shortest elapsed time. The course was simple. Sail downriver to a single mark, leave the mark to port and return to the start/finish line.

We allowed a starting window of one hour after the standard warning and preparatory signals. Never has so much bell ringing produced such little activity. We waited.

Start too early and you risk arriving at the mark too early and effectively park up trying to push the tide on the return leg. Leave too late and the tide will have turned and you may struggle to even reach the mark. The psychology of a fellow competitor choosing to start is sure to make all the others doubt their own plans.

And so it was to be. SBSC’s very own Allan and Steph in Enfin, a club boat, set off after 16 agonising minutes of competitors trying not to look anxious. Local knowledge, a proven track record. Anyone not casting off immediately was surely risking too much. But the wind was reasonable with a few gusts that at one point almost turned a boat off it’s launching trolley. Helms and crew were clearly expecting a fast passage downriver. Nerves held. It was to be almost five more minutes before John and Diana in a visiting boat from Minema launched. The tide was running hard and they crossed the line sideways. One minute later the other Minema boat of Robin and Andy set off. They too were swept across the line by the tide and attempted to get back above the line. But the Race Officer was being pedantic and once the line was crossed their clock was ticking. A safety boat was dispatched to let them know they were deemed to be racing (albeit in the wrong direction).

By now it was 13:07, 22 minutes after the starting bell. The PLA prediction for LW at Chelsea Bridge was 13:24. Clearly the shared received wisdom of the Club that the tide does not turn until some time after the LW time was on the minds of the remaining crews. This depends on factors such as recent rainfall, atmospheric pressure out at sea creating surge, or lack of it, and whether all the people in London flush their loos at the same time. Robert and Mark from Twickenham blinked first with Chris and Ronnie from Lensbury a minute later.

Fully 30 minutes after the starting signal there was a flurry of activity. Nigel and Agnes (SBSC), Micheal and James (Twickenham) as well as Paul and Katy (Silverwing) all set off within 30 seconds of each other. Leaving just one boat from SBSC sitting all alone on the beach ready to bookend the fleet. Local knowledge was proving a fickle and subjective thing on the day. Alex and Jane eventually set off 17 minutes and 14 seconds after Allan and Steph. A commendably bold strategy.

There were three safety boats accompanying the race and with the fleet spread by 30 minutes they did a great job of monitoring everyone. Especially as the lack of VHF line of sight meant we relied more on mobile phones. Less over and out and far more chatty. James and Natalia were in the safety boat tasked with shepherding the early boats with the added unenviable responsibility for choosing where and when to lay the mark. Sara and Andrew (with a beer each) on the second boat clearly thought they were in for an easy day. So easy they forgot to add a fuel line to their inventory and were running on fumes down to Putney Bridge and then stopped. Did I mention the beer! Graham and Patrick escorted the last starter and charitably carried a spare fuel line to the stricken safety boat and we were once again back up to a full complement.

By now the leaders had nearly reached Albert Bridge. James reported that the tide was showing signs of having turned. It was felt that with the later boats still to go under Wandsworth Bridge might struggle and that the course should be shortened and the mark dropped just before Albert Bridge. Would the tail-enders make it to the mark.? The wind had dropped from the promising amount at the start. Time and tide, as is their habit, were waiting for no-one.

The plan had always been for James and Natalia to stay with the turning mark and for the safety boat at the back of the fleet to pick up the leaders on the return leg. The crossover happened just before Battersea Railway Bridge. The two Minema boats returning on the south bank in favourable tide with Allan and Steph hugging the shallows on the Fulham side. It looked like their five minute early start had evaporated. With the amount of tide running upstream it also looked increasingly likely that the later starters may have miscalculated.

Leaving Sara and James to monitor the later boats and communicate any retirements before they could lift the turning mark, Patrick and I headed back to the club to take down the finish times to be able to confirm a winner. The first two boats were only a minute apart on elapsed time, but the second boat home sailed by Robin and Andy from Minema was the eventual winner with a shorter elapsed time of 1:31:34. Five minutes later Chris and Ronnie from Lensbury crossed the line and split the first two boats’ on elapsed time and came second overall.

It seems the sweet spot for this particular race was to start somewhere between 13:05 and 13:10.

The hunger inducing smell of Bar-B-Q was wafting over the boat park as all the boats were hauled up the launching ramp. SBSC had done us all proud. Great weather, a race without mishap and a burger and beer to follow. What a great day.

Congratulations to all the competitors and many thanks to the safety boat crews.