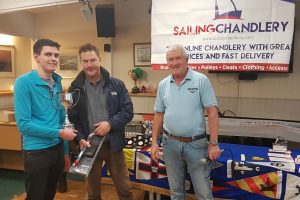 The event started with a gathering for breakfast and the rugby world cup final. After the disappointment of losing there was more disappointment as the wind had risen while we were all distracted and was unsailable. The race officer postponed, and the wind peaked and then dropped to a nice force 3-4 and the first race started at 2.30.

15 boats took to the water, Nigel and Andy Bird led for the first lap before being overtaken by Tim Sadler/ Chris Keatley and Martin Honnor/Gabe Hill on the second beat. This remained the order to the finish with Dave and Chris Jackman taking 4th place before Chris became the first casualty of the weekend, slicing his head open on the boom and therefore missing race 2.

15 boats started the second race as Steve Blackburn/ Tim Brownell had managed to repair their broken forestay and showed us all the way round, leading for most of the race and followed by the Birds, Martin and Gabe and national champions, Paul Hobson/ Craig Wheatley in 4th.

The light was fading as we sailed in and we almost needed floodlights to pack up! Northampton sailing club organised a great evening with food, bonfire, fireworks and a disco with everyone having a great time, some perhaps partied too hard!!

Sunday dawned with very little wind and not a Cornish man in sight!! Rumour has it they were clubbing until the early hours. Hobson/ Wheatley were seen on the shore, but they also were too fragile to take to the water.

So, a diminished fleet of 13 started race 3 despite the arrival of Matt Rawson/ Tom Dorr. The wind was very light and shifty with some big gains and losses over the course of the race. Steve and Tim took line honours again from the Birds who banged hard to the right on the last run making the biggest gain of the race to the dismay of the rest of the fleet who had all gone left! Martin and Gabe continued their consistent podium presence taking 3rd with Jon Woodward/ Charlotte Graham finding their form and coming in 4th.

The wind then dropped to almost nothing and we thought that might be it for the day, Jon and Charlotte were joined by Alice Allen/ James Hobson in a race for the clubhouse while the remaining 11 boats started race 4. The first leg turned into a reach and Tim/ Chris, Ann Jackson/ Alan Skeens and Ges Brown/ Julie Moore caught a zephyr and left the rest of the fleet for dead. Ges and Julie managed to overhaul Ann and Alan to finish 2nd and 3rd respectively. No one could catch Tim and Chris who took line honours.

Race 5 was started with a bit more breeze and a new course but only 8 boats as more had succumbed to the cold. The fleet split into 2 fleets of 4 with Tim and Chris taking their 3rd win of the weekend from the ever-consistent Martin and Gabe with Matt and Tom taking 3rd place.

The last race was down to the hardened core of 6 boats. The Birds caught a great shift up the first beat to lead at the windward mark from Tim and Chris and Martin and Gabe. On the first run Nick Jackson/ Laurence Dorr slipped into 2nd place and overtook the Birds up the next beat to lead to the finish with Martin and Gabe in 2nd, the Birds in 3rd and Charles Morrish/ Alison Robertson-Morrish picking up 4th spot forcing Tim and Chris into 5th.

Martin and Gabe won the overall event with their consistent performance beating Tim and Chris by one point with Nigel and Andy in third.